Sowing Faith in the Hard Times Brings a Harvest of Joy 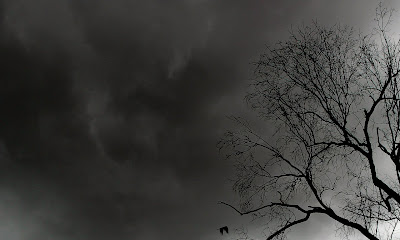 There are times, when life is lived in the dark. The days are long and hard, and the rewards nonexistent. Everywhere we turn—inside and out—the landscape is bleak and barren. It’s times like these that only faith will get us through. There is no proof we’re on the right path, no confirmation that God is at work. Often, even God Himself seems distant and unreachable.

I’ve been through the those times—and come out on the other side. My time of darkness came when our oldest son was deployed to Iraq as a frontline infantry Marine. We don’t come from a military family, so everything about his choice to enlist was an opportunity for growth. Every step in his journey was a time of stretching for our family. Oh don’t make the mistake of thinking we were disappointed in his choice. We were button-busting proud of our son’s willingness to serve.

But as his mother, I didn’t want to face the prospect of my son going off to war. 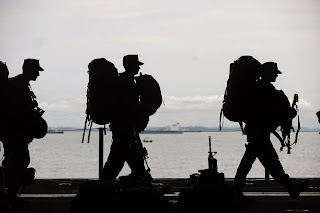 I’d always assumed I’d have a grace period between childhood and adulthood, some time of transition. College would have been that time. Marine Corps boot camp doesn’t provide that grace period. One minute I was hugging goodbye to my child, my oldest son. The next time I saw him, he was a fully formed man—still a son, but without any trace of the child I’d said goodbye to.

And before that year was out, he’d be half a world away, fighting an enemy whose main focus was on killing him. It was during those deployments that I learned about darkness of the heart. I wanted to protect him, I ached to shield him from what I knew he was experiencing, but I could not. So I did the one thing I could do. It became my course of last resort because I was at the end of my own strength.

And I prayed some more.

I learned to take my overwhelming fear to the only One who could protect him. And I left my son in God’s hands. The prayers weren’t pretty. Often times they weren’t even words. They truly were the groanings we read about it Romans 8:26-27. 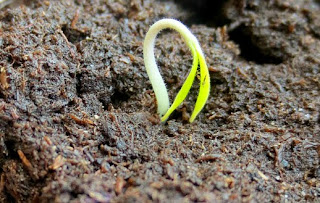 I didn’t realize it at the time, but I was like a seed, planted deep in the ground. I was surrounded by darkness, by rough, rocky soil, pressing in on all sides crushing the life from me. But through that incredible pressure, the shell of my own strength fell away, and I slowly began to push toward the light that I knew was just beyond the darkness.

And my course of last resort became my strength, and the first place I turned. Instead of praying in desperation, I began to pray in confidence. I learned to lean into God, instead of turning in on myself.

The final harvest of that time of darkness is has come to fruition with the release of my newest book. While My Soldier Serves is a book of prayers for those with loved ones in the military. How I longed for just such a book during that dark time. Now God has taken my time of darkness and is shining it as a light for those who are also facing the incredible stress of having a loved one at war.

Never doubt that God will bring a harvest of joy, no matter how dark the days you’re facing now. While My Soldier Serves
Thousands of families send loved ones off to fight on a daily basis. These families spend a lot of time living in a world out of control. This kind of stress can take an incredible toll, but there is hope. When we feel helpless, we can take our fears to the One who loves us more than anything and holds the universe in His hands.

In this book you’ll find the words to usher you into His presence. These prayers are a place to visit again and again as you take your own fears to God. They’re just a starting point, written to help you find your own voice as you call out on behalf of the one you love. 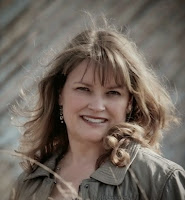 As the mother of a frontline infantry Marine, Edie Melson lived this book before she wrote it. Edie understands what it is to face adversity and come out triumphant on the other side. Her years as a wife, mother, and ministry leader have given her a unique perspective to reach out to others facing the same struggles. She's the Military Family Blogger for Guideposts.org, social media director for several writing websites, and a popular ministry and conference speaker. Connect with her on her blog, The Write Conversation, Twitter, and Facebook.
Posted by Edie Melson at 4:00 AM 1 comment: